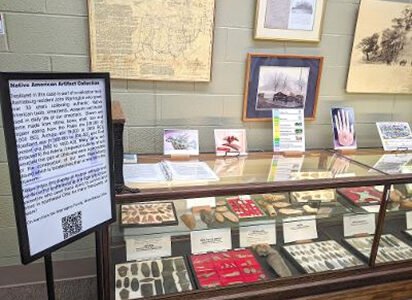 Adena Indian Culture and the Great Mound of Miamisburg, Ohio

Adena Indian Culture and the Great Mound of Miamisburg, Ohio

John (with the Miamisburg Historical Society) will discuss the rise of civilization from the Paleoindians through the Adena / Hopewell cultures that the Miamisburg Mound is attributed to. During the first portion of this presentation, he will highlight the characteristics of their settlements, tools, cultivation techniques, burial customs, and earthwork construction. The second part will be devoted to showing samples of artifacts that were collected by his late father, John Warrington, Sr., over a period of 40 years.

John Warrington
John is a lifelong resident of Miamisburg, Ohio. He earned B.A. and M.A. Ed. degrees in American and European history from Eastern Kentucky University. He also earned a library science degree from Wright State University in 1992. John was initially a classroom teacher at Franklin High School, and later an Audio-Visual Coordinator for Carlisle Local School District. He retired as the district Media Specialist in 2012, with a total of 32 years in education.